“If you have a dream, go for it,” says former NASA astronaut to all women

This year, the United Nations World Space Week 2021 is celebrating “women in space”, and dreaming big is what it’s all about. 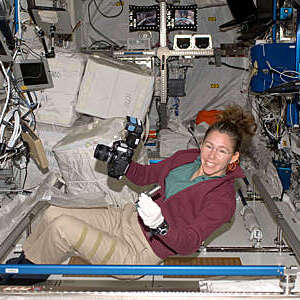 By Elizabeth Gasiorowski-Denis
Tagged as

“Have faith in yourself!” explains Dr Sandra Magnus, Professor at the Daniel Guggenheim School of Aerospace Engineering and former NASA astronaut. “If you have a dream, go for it. Don’t hesitate to ask for advice along the way. Don’t let others define who you are and what you can do.”

Selected to the NASA Astronaut Corps in April 1996, Dr Magnus flew two shuttle missions to the International Space Station (ISS) and served as flight engineer and science officer on ISS Expedition 18, spending four and a half months on board. Following her assignment on Station, she served at NASA Headquarters in the Exploration Systems Mission Directorate. Her last duty at NASA was as the Deputy Chief of the Astronaut Office.

Female role models like Dr Sandra Magnus are helping to encourage young women to pursue carriers in technology fields and equipping them with skills they need to navigate the workplace of the future.

With its “Women in Space” theme, World Space Week 2021 is expected to bring more awareness to the issue of gender diversity in the space sector and identify the obstacles that women are facing when entering space-related careers. The week’s theme also contributes to discussions on how to overcome these challenges.

The first woman in space was cosmonaut Valentina Vladimirovna Tereshkova, who orbited Earth 48 times from 16 to 18 June 1963. Women across the world took heart and dreamed they too might travel to space. Women’s access to space, not just as astronauts but as users and creators of space services like Earth observation and satellite telecommunications, is still far from equal. According to reports, only 20 %-22 % of the entire space industry workforce consists of women.

But there are signs of progress. Space4Women is a project of the United Nations Office for Outer Space Affairs to promote women’s empowerment in space. NASA’s plan to land a woman on the Moon is another positive sign. These are just a few examples of the growing numbers of innovative and effective solutions.

For its part, ISO is helping to advance the agenda with a number of initiatives, from the UNECE’s Declaration on Gender Responsive Standards to the ISO Gender Action Plan. It has also been developing internationally accepted standards for aircraft and space vehicles through its technical committee ISO/TC 20 since the organization’s creation in 1947.

World Space Week kicked off on 4 October with thousands of events globally, inspiring the next generation and celebrating the accomplishments and contributions of women to the space sector. The events will continue through October.

An overview of ISO/TC 20 and their work. This committee has developed more than 600 standards in the aircraft and spacecraft industries.