A small island coping with climate change: Trinidad and Tobago 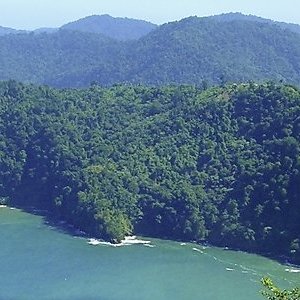 Like so many other small island states around the world, Trinidad and Tobago risks being severely affected by the devastating effects of climate change and must make mitigation measures a national priority. Even though miniscule in size and currently ranked 93 in the world in "absolute" greenhouse gas emissions (GHGs), Trinidad and Tobago has taken on the challenge of addressing its responsibility to the international community.

Our economy is based on the country’s oil and gas reserves which fuel a vibrant energy and petrochemical industry. While hydrocarbon resources are considered a boon, experience shows that this blessing can also have very negative outcomes. For example, the availability of relatively cheap energy and a history of fuel subsidies has led to disproportionately high levels of energy consumption and GHGs.

The island is acutely aware of the global threats posed by climate change and the need to make adjustments at the national level to contribute to international mitigation efforts. Policy makers have therefore recently drafted a National Climate Change Policy which identifies the following potential impacts:

Accepting its responsibility to reduce GHGs, Trinidad and Tobago is a signatory to the United Nations Framework Convention on Climate Change and the Kyoto Protocol. The Government’s policy is defined in the Medium-Term Policy Framework and the National Climate Change Policy. Both of these documents establish a framework for decisive action to mitigate and adapt to climate change.

Standards to the rescue

The Trinidad and Tobago Bureau of Standards (TTBS) recognizes that International Standards are important for supporting national initiatives to monitor and reduce energy consumption and GHGs.

The TTBS is an active participant of the ISO technical committee on environmental management (ISO/TC 207). It also coordinates inputs from the country’s National Mirror Committee (NMC) which is made up of national experts and other key stakeholders and replicates or “mirrors” the work of the ISO TC. In this way, the NMC has contributed actively to the development of key International Standards including ISO 14001 (environmental management) and ISO 14064 (greenhouse gas measurement).

Moreover, by adopting ISO 14001 nationally, and managing a related certification programme over many years, TTBS has greatly promoted the benefits of the standard for controlling energy consumption and environmental impacts. Recently we hosted a national stakeholder workshop on ISO 50001 (energy management) to build awareness of the benefits of this standard.

Recognizing the urgent need to address climate change, Trinidad and Tobago has implemented a number of national initiatives to change perceptions and cultural attitudes affecting patterns of energy consumption, water reuse and even waste disposal.

In this fight to turn back the clock on climate change, the country must use all the technology, assistance and tools available today. International Standards are one of the key elements in this arsenal to address the problems facing the nation and the world at large.

About Trinidad and Tobago

Trinidad and Tobago consists of twin islands with a total land mass of some 5000 km2. The country boasts a population of 1.3 million largely dispersed on coastal low-lying communities where most of the islands’ physical development has taken place over the years.